From the nation’s leading law firm representing victims of listeria and other foodborne illness outbreaks.

The CDC, several states, and federal partners investigated a multistate outbreak of Listeria monocytogenes infections. The outbreak investigation is over and did not identify a specific food item, grocery store, food processor, or restaurant chain as the source of infections.

Public health investigators used the PulseNet system to identify illnesses that may have been part of this outbreak. PulseNet is the national subtyping network of public health and food regulatory agency laboratories coordinated by CDC. DNA fingerprinting is performed on Listeria bacteria isolated from ill people by using a standardized laboratory and data analysis method called whole genome sequencing (WGS). CDC PulseNet manages a national database of these sequences that are used to identify possible outbreaks. WGS gives investigators detailed information about the bacteria causing illness. In this investigation, WGS showed that bacteria isolated from ill people were closely related genetically. This means that people in this outbreak were more likely to share a common source of infection.

As of November 7, 2019, a total of 24 people infected with the outbreak strain of Listeria monocytogenes were reported from 13 states. 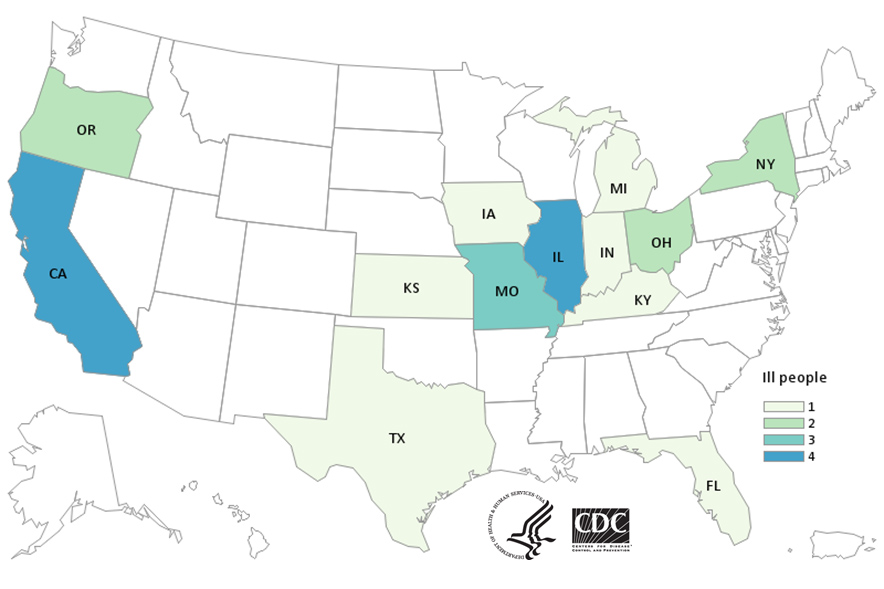 State and local public health officials interviewed ill people to ask about what they ate and other exposures they had before their illness started. CDC analyzed the interview data but did not identify a common food or exposure among ill people.

In Canada, a total, there were seven confirmed cases of Listeria monocytogenes illness in three provinces: British Columbia (1), Manitoba (1) and Ontario (5). Individuals became sick between November 2017 and June 2019. Six individuals were hospitalized. Individuals who became ill were between 51 and 97 years of age. The majority of cases (86%) were female.Based on the investigation findings, Rosemount brand cooked dicedchicken was identified as a likely source of the outbreak. Rosemount cooked diced chicken was supplied to institutions (including cafeterias, hospitals and nursing homes) where many of the individuals who became sick resided, or visited, before becoming ill.

The collaborative outbreak investigation was initiated because of an increase of Listeria illnesses that were reported in June 2019. Through the use of a laboratory method called whole genome sequencing, two Listeria illnesses from November 2017 were identified to have the same genetic strain as the illnesses that occurred between April and June 2019. Although the outbreak investigation has been closed, the Public Health Agency of Canada will continue to monitor this event as part of their ongoing surveillance activities for food-related illnesses in Canada.

The U.S. CDC is investigating an outbreak of Listeria illnesses occurring in several states. The type of Listeria identified in the U.S. is closely related genetically (bywhole genome sequencing) to the Listeria that was making people sick in Canada.

According to FSIS, Tip Top Poultry, Inc, a Rockmart, Ga., establishment, is recalling an undetermined amount of ready-to-eat (RTE) poultry products that may be adulterated with Listeria monocytogenes, the U.S. Department of Agriculture’s Food Safety and Inspection Service (FSIS) announced today.

The frozen cooked, diced or shredded, RTE chicken products were produced between January 21, 2019 and September 24, 2019. The products subject to recall bear establishment number “Est. P-17453” inside the USDA mark of inspection. These items were shipped to institutions nationwide in the United States and Canada (see the recalled products distributed in Canada).

The problem was discovered when the firm notified FSIS that multiple samples of product produced by Tip Top Poultry, Inc. confirmed positive for the presence of Listeria monocytogenes after being tested in Canada. The firm decided to recall all cooked, diced or shredded, RTE chicken products produced from January 21, 2019 through September 24, 2019 with product codes ranging from 10000 to 19999 and 70000 to 79999. Tip Top expanded the dates and the scope of the recall out of an abundance of caution.